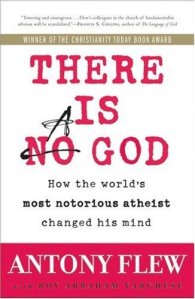 I’ve been reading Anthony Flew’s There Is A God which chronicles the author’s journey from one of the world’s leading atheists to becoming a theist.  I remember as a young man reading portions of the Encyclopedia of Philosophy of which Flew was the editor.

A skeptic might say, “Ah… he’s just getting old and scared.”  Yet Flew’s own claim is that what changed is mind is the world picture emerging from modern science.  Flew sees three ways in which modern science points to God.  First is the fact that nature obeys laws (e.g. gravity).  Second is the existence of “intelligently organized and purpose-driven beings” which are clearly more than mere matter.  Third is the very existence of nature itself and the unlikelihood of this something coming from nothing.

If you are seeking truth this might make a great read regardless of your current worldview persuasion.