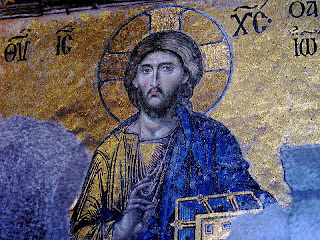 Why believe Christianity is true? Isn’t it just one of the great faiths along others such as Judaism, Buddhism, Islam, or Hinduism? (What’s strange about this question is that we don’t list Secularism as a great faith alongside these others. We’re so steeped in it that we can no longer even recognize it for what it is).

The Apostle Peter gave his answer without equivocation: “We did not follow cleverly invented stories when we told you about the power and coming of our Lord Jesus Christ, but we were eyewitnesses of his majesty” (v. 16). The event to which Peter refers is the Transfiguration of Jesus, which is recorded for us in another of this week’s readings, Matt. 17:1-9.

Matthew tells us that at one point Jesus took Peter, James, and John with him up a mountain. There Jesus was transfigured. “His face shone like the sun, and his clothes became as white as the light. Just then there appeared before them Moses and Elijah, talking with Jesus” (Matt. 17:2-3). When referring back to this event, Peter is saying very plainly, “Look, the reason I believe is because I saw Jesus transfigured before my own eyes.”

Where does that leave me? Do I need to see Jesus transfigured to believe? No, because I believe that what I’m reading here in 2nd Peter is a factual account. I believe that Jesus really did walk the earth, that he really was resurrected from the dead, and then ascended to the right hand of the Father. There are other reasons I believe too, but for me, this is the anchor of my faith.

A great conversation starter is this: “What is your philosophy of life?” Give them time to answer. Listen. Let them identify it and articulate it as best they can. (It’s not the easiest question in the world to answer). Then ask them, “On what basis do you believe this?”

So whose story to believe? It’s worth pondering, for the answer to this single question will direct the course of our lives.

This Sunday, Transfiguration Sunday, marks the climax of the Season of Epiphany. The Son of Man has been revealed. Now as we enter the Season of Lent we begin journeying to an even greater climax: the Son of Man dying on a cross to forgive our sins, conquer death, and give us new life.
Please use with attribution.