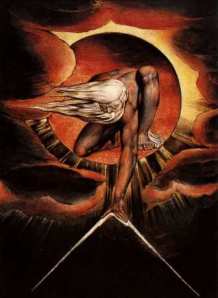 William Blake, “The Ancient of Days”
Daniel 7:9-10, 13-14
Proper 29
For Sunday, November 22, 2009
One of this week’s readings, albeit an alternate one, is Daniel Chapter 7. I’ve always found the Book of Daniel intriguing. It offers what appears to be a scheme for interpreting history. There are four beasts – a lion, a bear, a leopard, and a fourth terrifying beast with ten horns.
The first three beasts appear to correspond with three historical empires: the lion being Babylon, the bear being Persia, and the leopard being Greece under Alexander the Great. Much speculation has gone into the identity of the fourth beast. It has often been thought of as Rome and the continuation of the spirit of Rome, which is often thought to include the contemporary West.
Stepping back for a moment from the details, in which it is so easy to lose sight of the forest for the sake of the trees, what’s really the point? It is what we read in vv. 13-14:

In my vision at night I looked, and there before me was one like a son of man, coming with the clouds of heaven. He approached the Ancient of Days and was led into his presence. He was given authority, glory, and sovereign power; all peoples, nations and men of every language worshipped him. His dominion is an everlasting dominion that will not pass away, and his kingdom is one that will never be destroyed.

All of us long deep down for something secure to which we can anchor our lives. Some of us devote ourselves to our careers. Some of us pour ourselves into an avocation. Some of us buy gold.

The “one like the Son of Man” is Jesus and “the Ancient of Days” is his Father. Jesus has been given authority, glory, and sovereign power. If we want to anchor our lives to something truly enduring then it is going to have to be him. For his is the only dominion which is everlasting and his the only kingdom that will never be destroyed. If not even Babylon, Persia, Greece, nor Rome could endure, in what else are we going to put our hope? The U.S. Dollar?
Ask yourself this: “To what am I anchoring my life, … really?” If it is to anything other than Jesus Christ, then your spiritual GPS is currently chirping, “You have deviated from route. Would you like to recalculate?” How will you answer?
Please use with attribution.