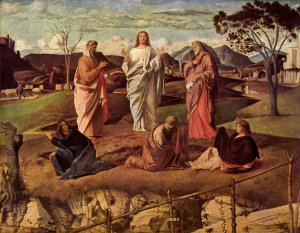 Bellini, “Transfiguration of the Christ”

When I was a kid I always thought Lent was a little strange. It sounded so much like lint. At the same time, my parents seemed to think it was a time to get one’s spiritual lint out.

Where does the name ‘Lent’ come from? The short answer is that it was a lot easier to say than the alternatives. As Wikipedia notes:

In the English language, Lent was formerly referred to by the Latin term quadragesima (translation of the original Greek tessarakoste, the “fortieth day” before Easter). This nomenclature is preserved in Romance, Slavic and Celtic languages (for example, Spanish cuaresma, Portuguese quaresma, French carême, Italian quaresima, Croatian korizma, Irish Carghas, and Welsh C(a)rawys).

In the late Middle Ages, as sermons began to be given in the vernacular instead of Latin, the English word lent was adopted. This word initially simply meant spring and derives from the Germanic root for long because in the spring the days visibly lengthen.

There is a thread of God’s redemptive purpose that runs from Moses through Elijah and on to Jesus. First, there are many similarities between Moses and Elijah (Expositor’s Bible Commentary). Both men received revelations from God on Mt. Horeb. Both crossed a body of water from west to east (Moses the Red Sea and Elijah the Jordan. Both exercised profound leadership that was then inherited by worthy subordinates (Joshua and Elisha). Both had lives that ended on earth in mysterious circumstances. H. H. Rowley said, “Without Moses the religion of Yahweh . . . would never have been born. Without Elijah it would have died.”

There is then a clear connection between Elijah and Jesus. The Prophet Malachi predicted that Elijah would return before the great and terrible day of the Lord. Jesus then completed the link by indicating that the ministry of John the Baptist fulfilled Malachi’s prophecy.

One take away for me is to follow the example of Elisha, who also appears in this chapter. Elisha found a man of God, and followed him, to the point of refusing to leave. As an aspiring man of God, I am acutely aware of my need for greater men to serve as models of the faith.

Please use with attribution.